It’s been a while since the last update to Survival City, but a lot has been added on since then!

The most major you’ll see in this patch is the addition of a new stat on all weapons: “Attack Speed.” Now all weapons will have an attack cooldown before another attack can be made. Small weapons like knives and automatic firearms will have shorter cooldowns. Slow weapons like the sledgehammer or magnums will pack a bigger punch, but get less attacks per minute. This change should improve weapon diversity and create interesting tactics when the combat timer is about to end! I’ve also added and rebalanced each weapon in these past few weeks so they’re all ready to go!

Another smaller change in this patch focuses on the different types of attacks. In addition to updating the attack buttons with labels, their various effects are listed in the patch notes below. The bonuses for using these special attacks is more properly balanced after the massive stat overhaul recently.

The last update to mention is the arrival of Sniffles, the second boss! This cute little fellow can now be found at the Bank, Clinic, Grocery and Depot. Just as Gains Goblin before him, this boss is also an atypical zombie. The virus has not affected his brain, but mutated his form into something… different. Don’t be fooled by his shuffling gait, though, he hungers for survivors just the same!

The process of designing, coloring and animating each of these zombies is probably the most time consuming part of development. Since I’m not a professional artist, I can only try my best to bring these visions to life. In the weeks since the last update, I’ve not only finished Sniffles sprite, but also completed all the Tier 3 zombies too. Expect them coming soon!

So check out this latest update and share your comments! 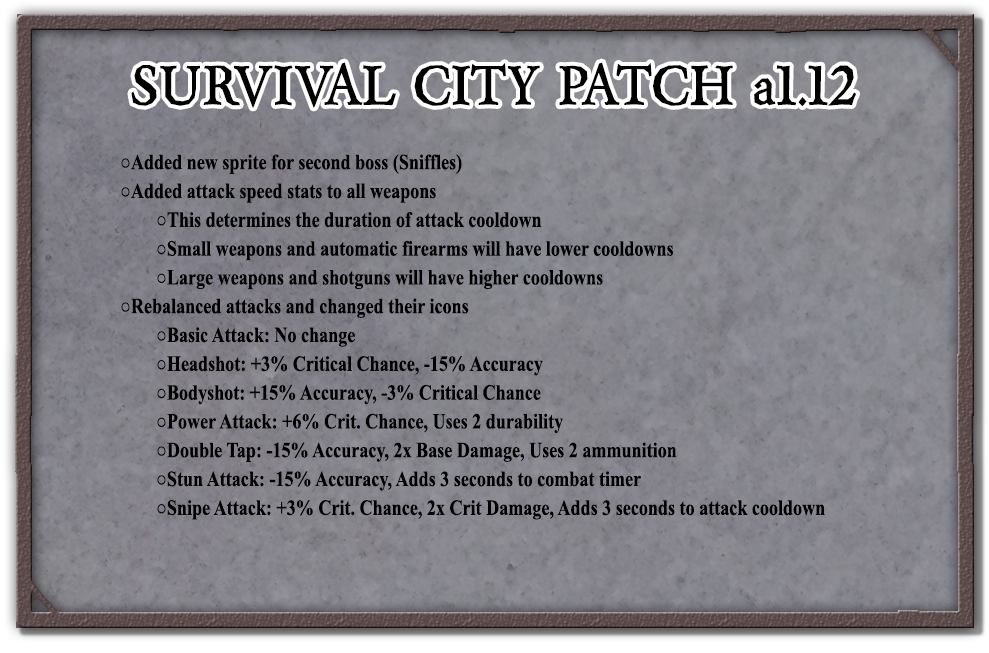