Since most of the code for the tiers beyond the first are already completed, I've been working on designing the zombies that will populate this new tier. I've been looking at horror comics and manga looking for inspiration on the aesthetic I'm looking for. In addition to some early concept art I had for the game, I've been designing zombies that I hope are unique and interesting. 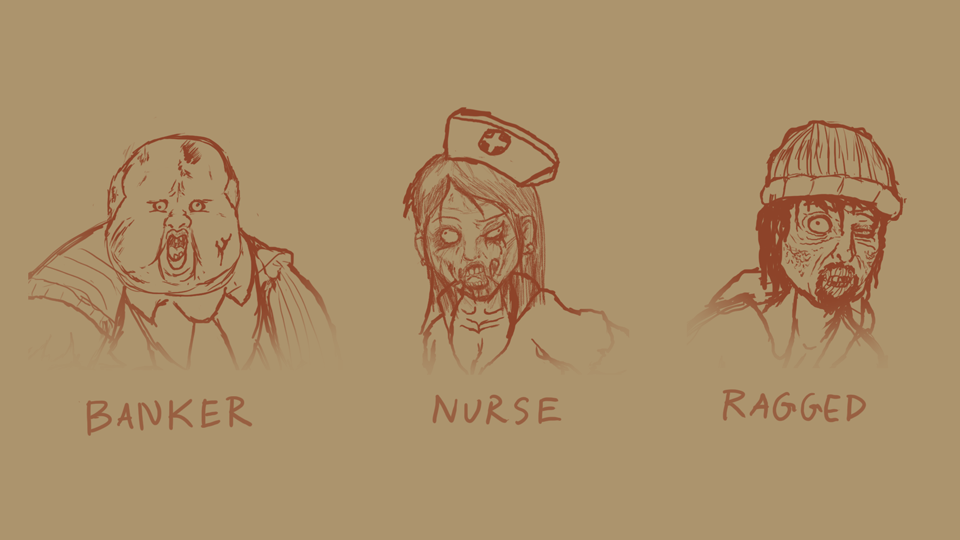 Each zombie is sketched digitally while a semi-final design is settled on. Once I'm satisfied with the general look, they are then inked, colored and shaded on 4 separate layers. This is because the zombies in-game can have their head and arms removed by dismemberment (I have to keep this in mind when designing how their body is positioned). Once the final colorized version is complete, they are then ready for animation. I place invisible joints to give their form structure and then carefully design an animation loop for when they are approaching the survivor. Having to do both the coding and the animation for the game is tough, but rewarding when I see the zombies come to life!

The locations that these Tier 2 zombies will terrorize will be the Bank, Grocery, Clinic and Depot. These new locations will offer better search loot than those in the first tier as the table below will indicate. Banks are one of the best places to find stronger weapons (or even an elusive pistol!). Groceries will obviously be your source of food and water. The Clinic will have mostly Health recovery items, but also features the first chance to find Antibiotics to cure those pesky illnesses! Lastly, Depots will be a prime way to build up those Wood and Metal stores.

Coming soon to a neighborhood near you

Once these latest batch of zombies are fully animated, I'll do some internal testing before uploading the first early access version to Itch.io. Survival City is about to get a little bigger, but in the meantime, check out the demo and share your thoughts below!